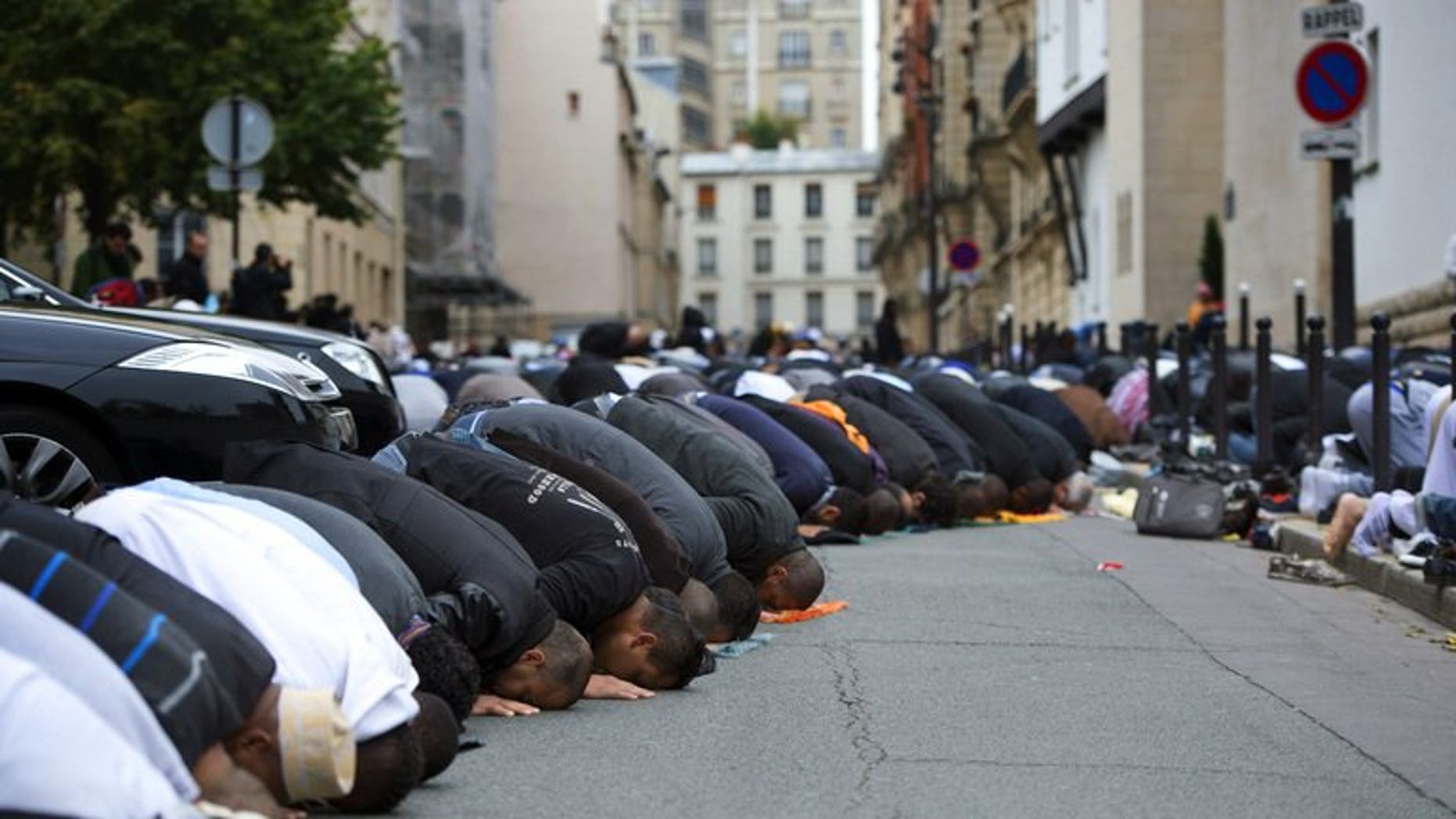 Muslims pray outside the Grande Mosque of Paris on the first day of Eid al-Adha on October 26, 2012.  (AFP/File)

A religious liberty advocacy group is threatening to slap a Seattle-area school district with a lawsuit unless it revokes a letter urging teachers to bless Muslim students in Arabic during the holy month of Ramadan and give them preferential treatment, including skipping tests.

The Freedom of Conscience Defense Fund claims the Dieringer School District is officially endorsing Islam and is following a script by the Council on American-Islamic Relations (CAIR) that urges schools to make special accommodations for Muslim students and to wish them “Ramadan Mubarak,” which means “Happy Ramadan,” or “Ramadan Kareem,” which means “Have a generous Ramadan.”

PHILADELPHIA MUSLIM GROUP SHOULD BE PROBED FOR DISTURBING VIDEO OF ‘RADICALIZED’ US KIDS: REP ZELDIN

The CAIR guidelines also instruct teachers to monitor Muslim students fasting and suggests teachers not schedule any tests on the Islamic holidays of Eid Al-Fitr and Eid Al-Adha.

“By urging teachers to bless Muslim students in Arabic, the district is running roughshod over the First Amendment’s mandate of government neutrality toward religion,” said Daniel Piedra, FCDF’s executive director. “A school district would never order teachers to ‘welcome’ Catholic students during Easter with ‘He is risen, alleluia!’ Singling out Muslim students for special treatment is blatantly unconstitutional.”

The defense fund claims Dieringer Superintendent Judy Martinson blindly followed the recommendations of CAIR and “enacted the letter as official district policy.” The defense fund sent Martinson a letter stating their complaints after a teacher and parent complained about the new procedure.

The May 6 letter also warned Martinson about CAIR’s anti-semitic advocacy and alleged ties to radical Islamists, which the group has long denied.

Ibrahim Hooper, national communications director for CAIR, the nation’s largest Muslim civil rights and advocacy organization, told Fox News the pushback from FCDF is a “sign of the growing Islamophobia in our nation that showing respect for and accommodating the religious traditions of Muslim students could result in punitive legal action.”

MONTH OF RAMADAN FASTING FOR MANY MUSLIMS BEGINS MONDAY

Though there is nothing in the Constitution that prohibits public schools from accommodating students’ religious exercise to the extent it would not interfere with educational interests, FCDF claims that by issuing CAIR recommendations to district employees, Martinson “acted under color of state law to create an official policy that has a primary effect of advancing religion. The Ramadan Policy, in both adoption and implementation, plainly imposes liability on the District under the United States and Washington Constitutions.”

FCDC also takes issue with the suggestion that schools skip tests on Eid Al-Fitr and Eid Al-Adha and claims CAIR is trying to justify celebrating the days by “falsely contending these holidays should receive similar treatment to Christmas.”

“This approach is wrong for two reasons. First, adding Islamic holidays does not further the district’s educational mission and academic goals. Recognizing holidays is constitutional only if the purpose is to provide secular instruction about religious traditions, rather than to promote the particular religion involved. Second, CAIR’s recommendation that teachers schedule tests around Eid Al-Fitr and Eid would alleviate no burden on Muslim students,” FCDC said.

Monday marked the start of Ramadan, a monthlong celebration that began in the seventh century and commemorates Allah, the Arabic name for God. Muslims are expected to pray at night, fast during the day and abstain from sexual activity between sunrise and sunset.

Calls to Martinson seeking comment were not immediately returned.

These are the idiots that won’t let you say ” Christmas Holidays “, won’t allow Christmas trees or decorations in or around any city, county or state building. Won’t allow you to say ” Easter Break”. No prayers before athletic events, on and on. These miserable pieces of crap have made absolutely certain that the name of Christ is never seen or heard in or around a public school. They have pretty much banned the Pledge of Allegiance, and the brainwashed students take a knee during the National Anthem. They take away the parents rights every chance they get. These totally useless individuals don’t deserve to live in the ” Land of The Free and the Home of the Brave “.  They are a disgrace to this glorious nation.