One thing you have probably noticed, is that the left is very patient. They are willing work at a particular item on their agenda for years, before actually getting it into place. They patiently wait until they feel the general attitude of the public will accept it, then they push it hard until they can make it happen. When they try getting a particular law passed numerous times, those are trial balloons, to see if you, the public will buy it.

The Democrats have been inching closer and closer to making the transition to socialists for a good number of years, patiently waiting until the time was right to make the push. The Bernie Sanders campaign in 2016 was a trial balloon. The amount of support he was able to garner surprised everyone. He ended up in second place again in the 2020 primaries. The only reason he didn’t go all the way, is the establishment Democrats panicked, and got cold feet. However, what is interesting is that Joe Biden has now morphed into Bernie Sanders.

Anyone that has watched Joe Biden over the past six months, can’t deny that this poor guy has some serious mental issues going on. One can only wonder if the Dems are going to support him all the way to the debate stage knowing it’s going to be a massacre. Joe simply isn’t generating enough excitement for people to pony up campaign contributions, and that has the Dems concerned. That’s why Barrack finally endorsed Joe. It’s all about the Benjamin’s as Ilhan would say.  In his press release, Obama said proudly that Joe Biden was the most progressive candidate the Democrats had ever fielded. ( paraphrased ) Don’t be surprised if the Dems, dump Joe before the Democrat Convention, citing his declining mental health, putting Governor Cuomo in his place.

The Democrats are now feeling that the USA is ripe for pushing the socialist agenda. You can, in large part, give Bernie credit for that, he was the ” tip of the spear ” for the Democrat party, to usher in the new Democrat Socialist Party. I told you several blogs ago, that Bernie was never serious about being President, he was “greasing the rails”. I’m sure you noticed that every Democrat candidate on the debate stage tried to go further left than their competition. They are not trying to conceal this agenda in any way.

Then, China handed the Democrats a wonderful gift, COVID-19. I think it’s safe to say that this so called pandemic, which turns out to be no worse than the seasonal flu, is pretty much going to undo President Trumps economic successes in one fell swoop. The Democrat Governors in the coastal states are not going to let this go to waste, they are going to stretch this out as long as possible to make the impact even worse. They feel if the economy is still in the weeds at election time, Donald Trump will be toast. In the meantime, during all of this chaos, those same Democrat governors are closing down churches, synagogues, gun stores, large gatherings, ( read political rallys ) everything they can to hurt the conservatives. They are stripping you of your Constitutional Rights, as if they were petty despots. They feel this emergency situation has given them power that trumps the Constitution.

Now for the proof they are all liars. The Democrats are saying, they can’t open the economies until the coronavirus is vanquished, because they can’t risk losing more precious lives. The Democrats embrace late term abortions, which literally means killing a living, viable baby. About 650,000 babies were murdered last year by abortionists. That is ten times more lives lost than the predicted 65,000 that will die from coronavirus. Governor Cuomo is the one that keeps touting saving precious lives, he signed the most horrific of all abortion laws last year. THEY ARE ALL LIARS, WITHOUT SOULS. THEIR ONLY INTEREST IS GAINING COMPLETE AND UTTER POWER OVER YOU.

It’s time to resurrect the SPIRIT OF ’76, and take back our states. Tell the power hungry governors to rescind their draconian orders and allow people to go about business as usual. We can do this just like our brave revolutionary forefathers, with protests, and all sorts of civil disobedience. We need to show the Democrats we are not going to herded like cattle to slaughter. Stand up for your Constitutional rights brothers and sisters. Thank God our brave forefathers put liberty before personal safety. For me, Live Free or Die. 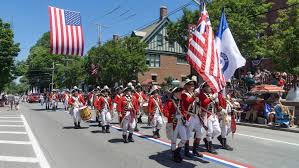