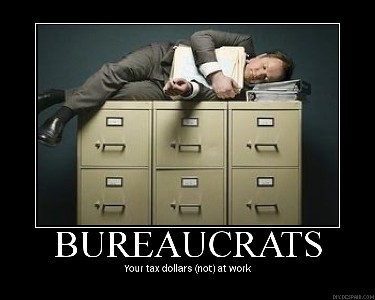 bu-reau-crat \ ‘byura,krat \ n – unelected democrats, that make up an unwieldy administration system that is largely unaccountable to anyone,  for any reason whatsoever.

Presidents, Congressmen and Senators come and go, but these people are like cockroaches. No matter how far the human race has progressed, they still can’t get rid of cockroaches. Washington bureaucrats are exactly the same. Indestructible.

The big problem is that these people are not elected by the people. They are either hired or appointed. They inhabit bureaus that make rules and regulations that you have to live by, which are basically laws, that are not enacted by the Congress. Have you ever heard of a Congressional oversight committee for bureaus? Who’s watching these people? These people are in effect, the fourth branch of government, and largely out of control. I’m pretty sure political leaders came up with the idea of bureaus as a way to get things done without having to deal with Congress, and take heat from the voters.

Democrats love big government. So naturally, bureaucrats are going be, more likely than not, Democrats. They know that being a Democrat is excellent job security. They also know that no matter how little they actually do, or how poorly they perform on the job, they will never be fired. They also know that at the end of their tenure, they have a really great retirement waiting for them. It’s the Democrat’s version of paradise.

Although far fewer Republicans inhabit these infamous bureaucratic offices, they are still willing to play along and participate. It’s simply the way life is in Washington D.C. It’s always been this way, why change it? After all, the flow of money never stops. Why not take advantage of a perpetual cash flow? What kind of nut would pass that up. Both political parties have their own special way of extracting money from the hard working taxpayers. I think their rationale is ” hey, they voted for me” they must be OK with what I’m doing. How many people pay attention to what their elected reps are doing? I do, but I’m pretty sure I’m in a very small minority.

President Trump ran and won on his famous phrase of “draining the swamp”. That’s like anything that sounds good in theory, but actually making it happen is another thing altogether. Not to say he hasn’t lowered the water level slightly, but really draining the swamp would literally mean firing every last bureaucrat and starting over from scratch. That would be like thinking you could convince Hillary Clinton that she lost the election because she is a dumbass, plain and simple. Or just convince her to shut up and go away. The chance of accomplishing any of this is ” slim to none”.

The Democrats have a real, vicious hatred for Donald Trump. But in reality, any Republican President will have similar problems. They made W’s life pretty miserable as well. The Democrats have very successfully built a fortress of ” red tape ” that is almost impossible to breach. I have no idea how you ever deal with this issue, I’m just pointing out that it exists, and that it’s in direct opposition to a Democratic form of government. The term “Government of the people, by the people, and for the people” is not really true anymore. It’s pretty much ” us against them”, and I think they’re winning.

There is simply too much to lose. Keep fighting back anyway you can. Identify the strongholds of the left and infiltrate them. Local school boards and City Councils are a great place to start. Start making it hard for the lefties to further their agendas. Become an activist in State Government, if you can’t run for office, let them know you vote and you are paying close attention to what they do. Join a larger group that has more clout. Don’t make it easy for the looney left to make this nation unrecognizable. 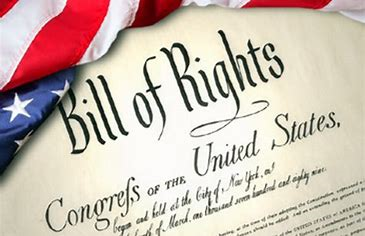 One thought on “A REPUBLICAN PRESIDENT CAN NEVER BE 100% EFFECTIVE.”